august 4-5 2018. east of main, vancouver. best night i’ve had in weeks. quiet, dark, a bit cooler. it was the last night of vancouver’s celebration of explosions on english bay. i went in the opposite direction and it was as if the city was mine. or at least it would leave me alone for the night.

weaving a way through alleys and cubbies and unopen spaces, i felt the silence wrap itself around me like a pair of legs. my eyes adjusted to the darkness and i could suddenly perceive all the detail – no, all of it – streching back into time’s horizon.

for a moment it was as if the city and i understood each other. just for a moment. i turned into the next alley. and there it was, the whole length of the block: a complete wall of murals from 2007, one of those years i just don’t remember. the sun started to rise, but it was crying too.

When they called in the morning and I realized it was precisely because I am unaffiliated, and am doing gig work while I try to sort things out, and pursue my assorted interests, and tie up a few loose ends. I could give an unvarnished opinion on the Treatment Strategies report, and nobody (else) would be punished, no organization would lose funding or a research contract. #HarmReduction is widely applicable.

And a lot of the report was encouraging. Then words started to jump out at me. The tone  became ominous. Then–

So, I am against every drug user in my neighbourhood, including myself, being forcibly removed from society and sent to behaviour-modification camps. What if the camps were peer-run? Still against mandatory relocation to lord of the flies-land, even if there is free dope, yes.

CBC was doing ‘journalism’ by asking me to be on the program, since they were aware of what I outlined in my previous post. The people who were on the inside of this process were (with reason) unable to speak out, or were in favour of this, or were discouraged from reading it, or were manipulated into dependence, or think that by some magic, this won’t include them.

And I won’t discuss how “research suggests” that this might be a good idea, except to note how weak-ass that is, and how non-science is the ‘science’ presented.

And there’s a drift, as you read the report closely. At the outset, “recovery” is a process. By page 20, abstinence means success.

I was hesitant at first to do the afternoon show – I wasn’t going to get into a performative debate about ‘personal experiences’ and I don’t do the “traumatized addict” routine. I talked to the show’s production assisting-journalist for ten minutes or so, and an hour later was heading to the studio. I reflected, inevitably, on how strange and fuckedup and amazing this last year has been, and how concerned and anxious I am about my own future.

Link to the BCCSU’s media release

Link to the report. It’s a PDF.

“Based on the agenda of the City of Vancouver’s Urban Design Panel on Wednesday (June 27), the development will have 38 housing units as well as 12 micro dwelling units above commercial spaces on ground level.” Those are the only details about the ‘development’ in the article cited below. 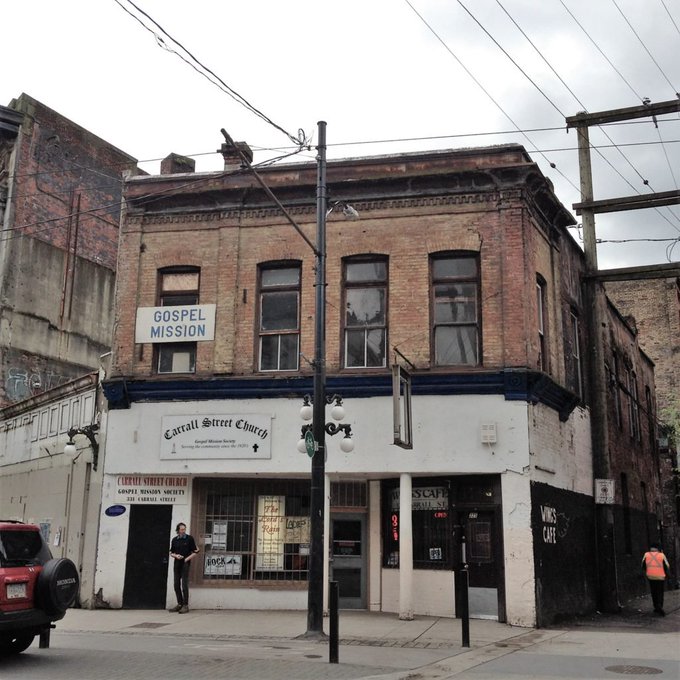 cw: the thread that will undoubtedly ensue may contain various not-exactly-on-topic freak-outs, references to harsh things, bitter yet nuanced literary allusions, & images i spend too much time making (gifs gifs gifs). Because this is worth it. #ThisIsWhy

This ‘development’, the article does not note, is beside this capital-generating structure, and an important public space. Good thing I checked, because if you read @tlupick‘s article, I am already pissed off about this! 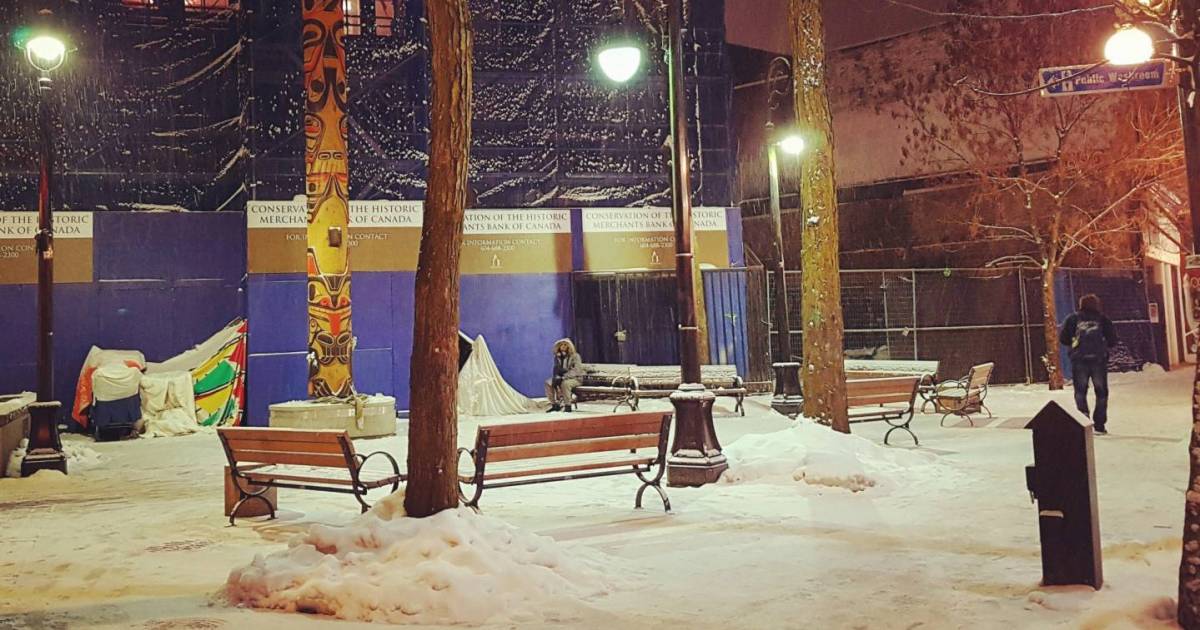 A stylish new vision for for a popular Downtown Eastside gathering spot is creating controversy.
I have some facts: “The Applicant, Human Studio Architecture + Urban Design on behalf of the Developer, Millennium Group have applied to the City for permission to restore a 2-storey municipally designated heritage building (McConnell [335 Carrall]), …. 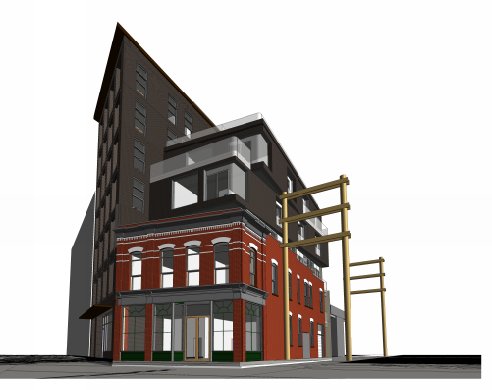 add a 3-storey addition and build a 7-storey infill building on the adjacent lot (333 Carrall).

That was Millenium who is developing this ‘site.’ That’s relevant information 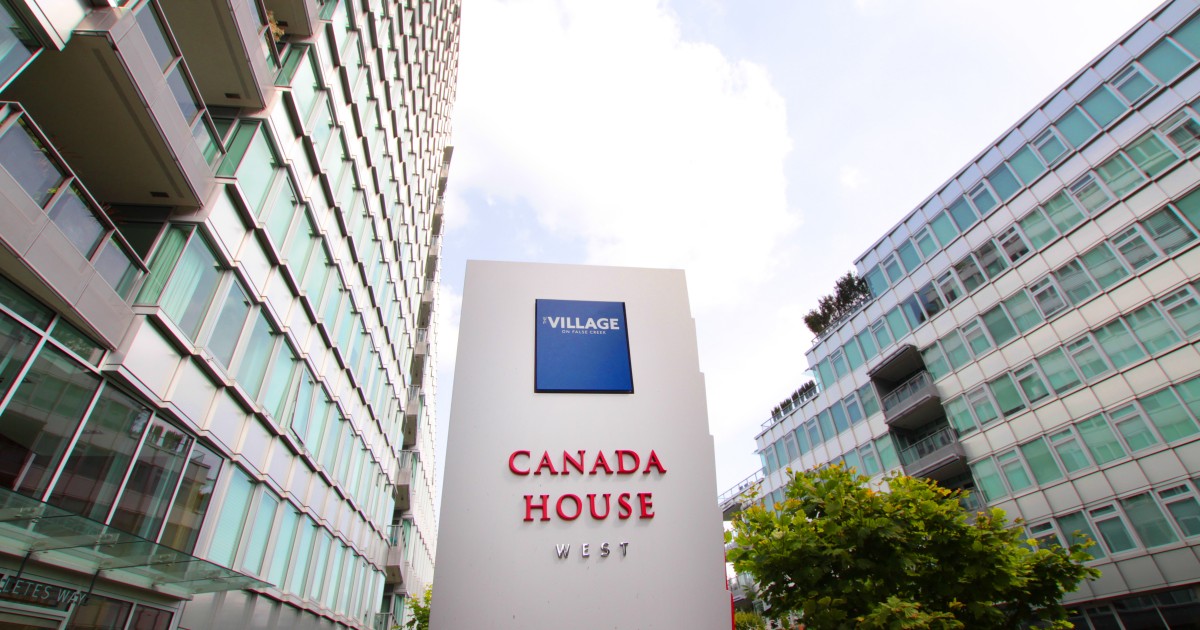 As controversy continued to swirl around the 2016 Rio Summer Olympic Games in the leadup to the event’s August 5 opening ceremonies, a divisive legacy of the 2010 Winter Olympics remains

But as this history of the old building, the Louvre, beautifully woven  by @PstTnse reveals, this is about much more, and less, this is about settler-vancouver and the #dtes and what it is.

It’s not fancy, but this is one of my favourite extant heritage buildings in Vancouver, and now it is in danger of coming down due to a demolition next door by developer Millennium
For the Panel’s attention. I am writing with great concern for the future of 323-335 Carrall Street, the McDonnell Building, once the Louvre Hotel, adjacent to Pigeon Park (Pioneer Square). I will not dwell on the elitist inadequacies of the building design overall;
It is an unimaginative offering at best and does not meet the standards of this area’s past, nor I hope, its better future. But this proposal is, frankly, an affront to our collective #history, and an erasure. 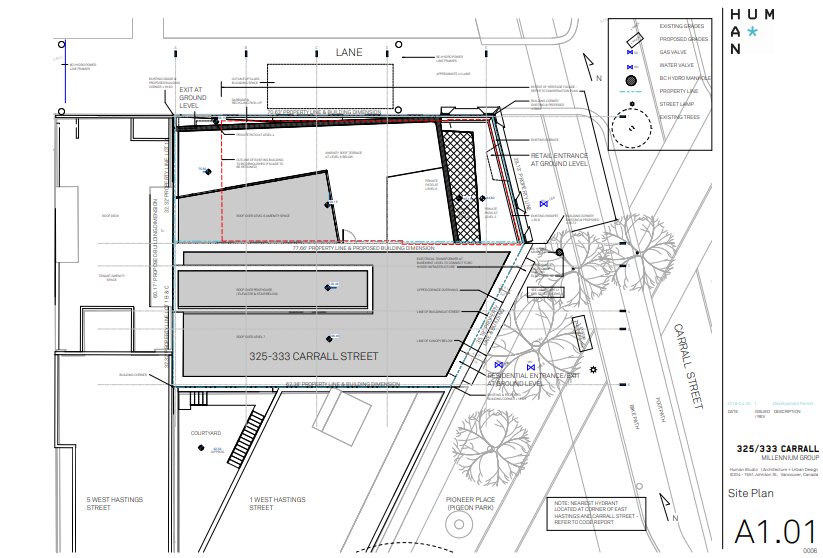 This building is contemporaneous with the Great Fire. It is listed as the “Vancouver Tea &Coffee Co.” in 1889, operated by Won Alexander Cumyow. He was the first person of Chinese descent born in “Canada,” and barred by racist laws from becoming a lawyer…
he served as an interpreter, speaking several dialects very well and perfect 19th century Vancouver english. He was the only person known to have voted both before and after disenfranchisement. [below, voting in 1955.] 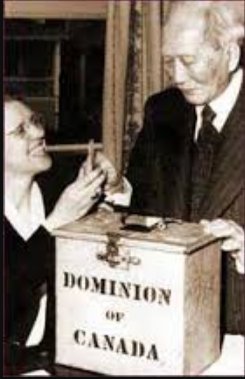 A little later the building was the Louvre Saloon, and was the place to go. It became the Louvre Hotel because Prohibition.
This is the oldest “ghost sign” in Vancouver. Beds 20c. 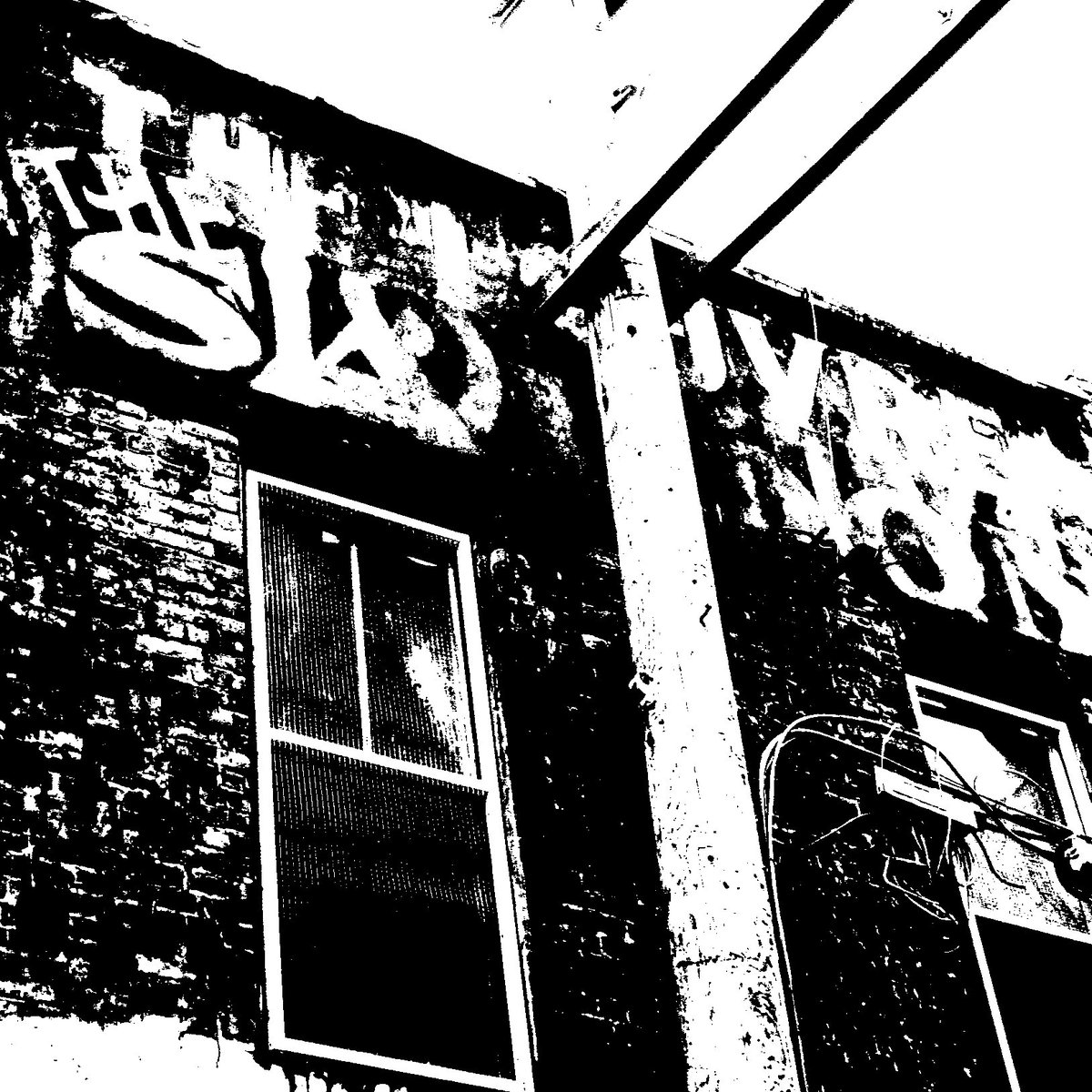 But the building’s first occupant, interestingly, was the Vancouver Drug Co. Among its more recent tenants, were the people who opened the unsanctioned safe injection site that led to Insite, the Vancouver Area Network of Drug Users @VANDUpeople – Canada’s first drug-user org.
And 327 Carrall was the place where WAHRS, the Western Aboriginal Harm Reduction Society was founded. Lives were saved there. Lives are still being saved today because of things that happened there, words that were said.

Now, I am no nostalgic sentimentalist. This building should be cared for, restored, re-opened. But this, I submit to the Panel, is an important historical site, one which has enabled, through community, the growth of a transformative movement that has become national, and beyond.
The idea of VANDU – a politics of Harm Reduction -has changed many lives, beyond an organization, and beyond simple stereotypes of the “drug user”. Bud Osborn wrote poems on the walls and painted over them later. I met him here. This is our history, everyone’s. Vancouver’s.
We must acknowledge this as a part of who we all are. This historical awareness is part of the knowledge that is required, I believe, to end the overdose crisis. To find roots, foundations, when we have none. Together, we were a forest of raised hands that day 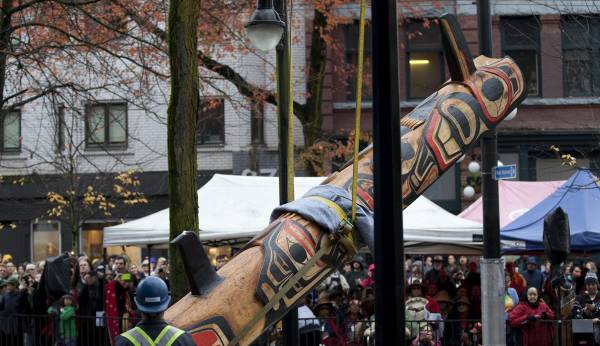 And it is Sacred, too – @cultrsaveslives drums there, often. The Survivor’s Totem, raised just 2 years ago, is a spiritual axis for the entire community. We remember our dead there. It is a very important place. 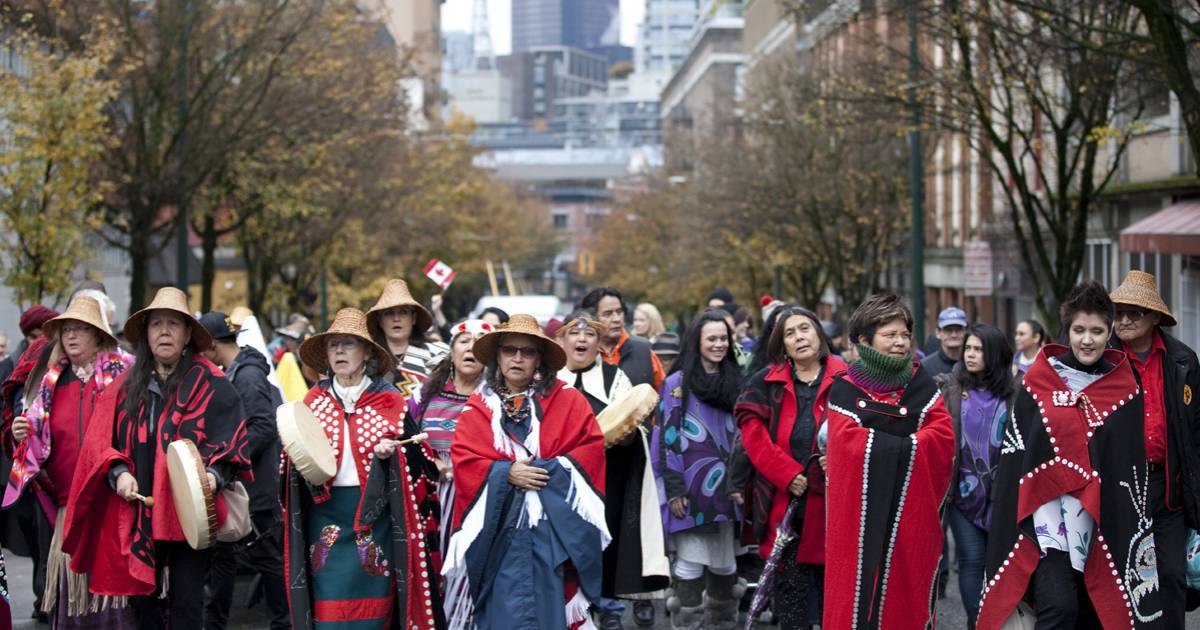 Carved from a 982-year-old red cedar log by Williams and 12 apprentices, the 27-foot pole now stands tall at the corner of Hastings and Carrall, in the centre of Pigeon Park.
It is not a concrete triangle, a blank slate.
It is a history that needs no plaque but is not less real. It pursues us all fiercely 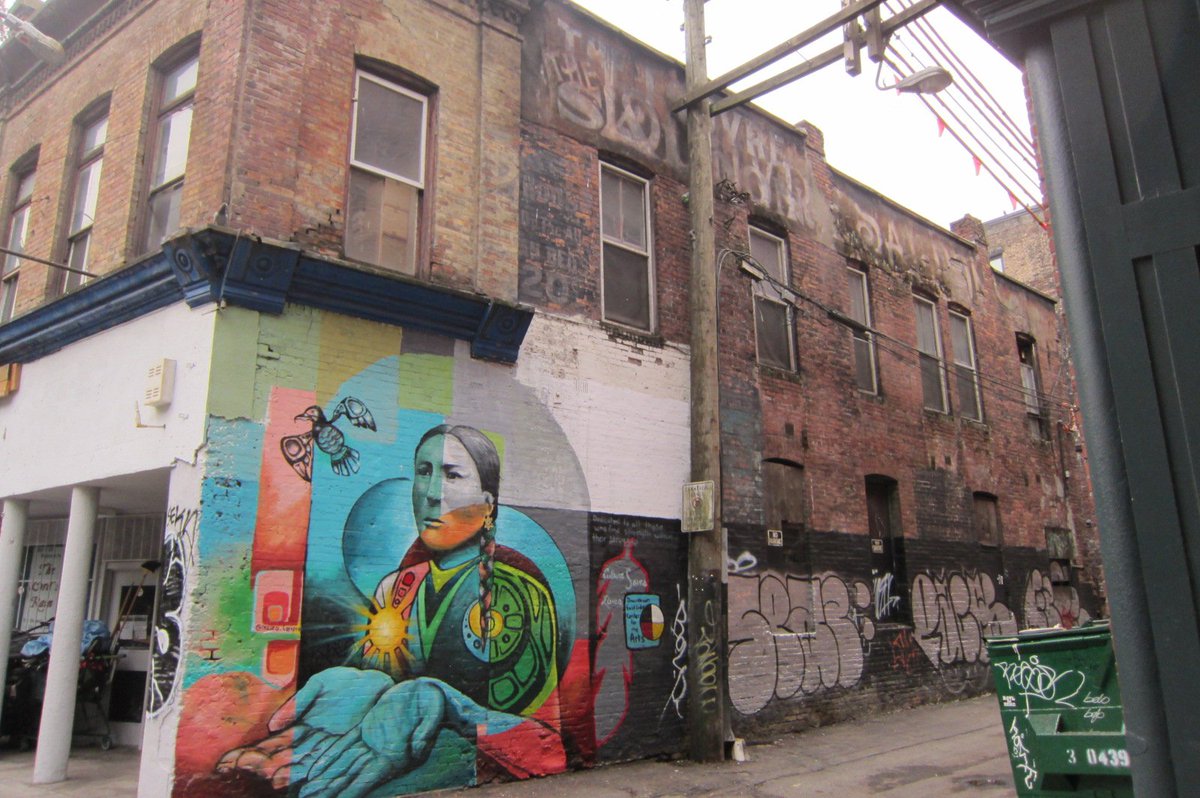 It’s said that History is Written by the Winners. I disagree. I think history is what you choose to work to understand. It’s what you choose to read, or look squarely at, or finally face. It’s a complicated thing: to really understand the past, I think (and I don’t, yet)
one must prepare oneself to be strong and brave and vulnerable enough to face the present too, and be hurt by both.

Right now, we need this building to be much more than is proposed. I urge you to reject this proposal.

(June 26 2018, part of a submission to City of Vancouver Urban Design Panel)