“If there isn’t at least the beginnings of two or three dozen 60-storey mixed-income towers all over the place by the end of this month, I’m leaving town and won’t write a heartfelt think-piece about it,” said a guy with a job and home and a stupid hat.

Tourism Vancouver has indicated that many cruise ship passengers, unsure now of what to do and shocked at the un-postcardlike spectacle, can be spotted downtown, spinning in place.

“Quick,” reads one hastily scrawled letter to council. “How about Temporary Modular Sixty-storey Towers? INCREASE MY PROPERTY TAXES. Whatever you need.”

The sudden awareness of the mountains of drug user corpses looming over the city has resulted, of course, in resentful bitterness among those vying for the title of first-world problem warrior (vancouver 2022).

“I want to look soulfully at mountains when things are tough and I need to put things in perspective,” said a software engineer whose life is totally tough. “I don’t want to be reminded of the epidemic in our midst that illustrates so precisely the scale of the tragic moral and cultural failures of our society.”

“Obviously I never want that.” 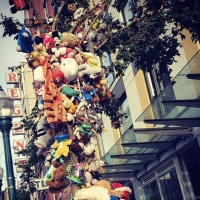